When faced with a high leverage situation in which the offensive team prioritizes scoring one run over the possibility of scoring many runs managers may be tempted to sacrifice bunt when a leadoff hitter reaches base. As a pitcher with the objective of not giving up that critical run, you should (in the majority of situations) command the zone, throw strikes, and take the out. The analysis below shows that there are limited situations in which a sacrifice bunt actually increases a team’s probability of scoring a run and 81% of the time a sacrifice will actually decrease the probability of scoring.

Bunts and especially sacrifice bunts have been under attack from the sabermetrics community and for good reason. There have been many empirical studies which have concluded a team has a negative payoff when the team gives up a scare out to move up a runner.1 One can calculate the pay-off from a successful sacrifice bunt by comparing run expectancy (expected runs until the end of the inning) from two different states of the game (Number of outs and baserunners). Moving from no outs and a runner on first to one out and a runner on second has a -0.195 effect on expected runs.2 This effect may be expected because by not bunting teams are “playing for the big inning” or maximizing expected runs by increasing the chances they will score multiple runs rather than “playing for one run” by sacrifice bunting a baserunner into scoring position. This type of strategy was favored by HOF manager Earl Weaver.3 One may expect that the trade-off for “playing for the big inning” would be a decreased probability of scoring at least one run; however, empirically the probability of scoring decreases by 1.9 points when “playing for one run” (i.e. moving between the aforementioned states of the game).2 Finally, sabermetrician Tom Tango has shown that the “playing for one run” strategy actually decreases a team’s win expectancy late in one-run ballgames.4 One may think there must be situations in which a sacrifice bunt would prove beneficial for the offense. Intuitively, it would make sense that given a sufficiently poor batter (say a pitcher batting) sacrifice bunting would have a positive effect on the offense.5 In this analysis I narrowly define offensive success as scoring one or more runs before the inning ends and determine the limited conditions necessary for a sacrifice bunt to have a positive effect on the likelihood of success. I analyze Statcast data from MLB’s 2017 regular season, limited to regular players and pitchers. Determining the effect of a successful sacrifice bunt on likelihood of scoring requires evaluating the difference in likelihood of scoring between two states of the game; before and after the bunt. I define the before state using the following variables: game state (outs and runners), pitcher skill (wOBA against), batter skill (wOBA), and on-deck batter skill (on-deck wOBA). I built a logistic regression model to predict the likelihood of scoring with those variables as regressors. I define the after state using the following variables: game state (outs and runners), pitcher skill (wOBA against), batter skill (wOBA 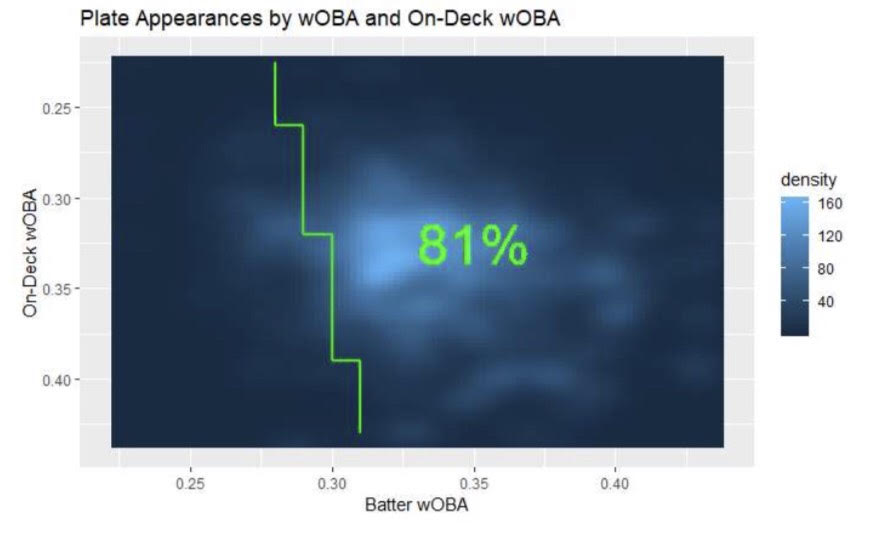 While watching the MLB playoffs this fall do not fall into the fallacy of thinking teams need to play small ball to increase their chances of scoring at least a run in a high leverage situation or pivotal game.

5 Standard run expectancy tables condition only on the number of outs and baserunners associated with previous on-deck wOBA). Once again, I built a logistic regression model to predict the likelihood of scoring with those variables as regressors.

Brad Woodfield possesses his BA from Lafayette University (NCAA I), double majoring in fields of Math and Econ. En route to his MBA ’18 with concentration of Econometrics from the University of Chicago. Brad has teamed up with Lokation Nation on the data and analytics side, to provide more studies and information for the baseball community to view and fairly determine results of pitching command and location, in relation or accordance with velocity. We will be utilizing a variety of topics and theories to help us better understand how command and location may be a bit underrated in terms of what makes pitchers truly successful.  Brad brings unique perspective to his ability to number crunch being that he was a Division I pitcher for Lafayette University in the Patriot League (NCAA I).  Welcome aboard!